Employee Stock Options (ESOs) are still an important part of many companies’ executive compensation programs. Unfortunately, there are difficulties in determining precisely what they are worth. The requirement to account for ESOs as expenses in corporate financial statements has increased the focus on the question of what they are worth. However, the approach for valuing ESOs for accounting purposes may not be the best way to look at ESOs for other purposes, such as deciding when to exercise one’s ESOs.

By far the best known model for valuing stock options is the Black-Scholes model. It was developed by Fisher Black, Myron Scholes, and Robert Merton, and published in a paper written by Black and Scholes jointly and another written by Merton in 1973. Scholes and Merton received the Nobel Prize in economics in 1997 for this and related work; Black would undoubtedly have also been so honored if he had not died in 1995.

The Black-Scholes model makes certain assumptions, the most important of which for our purposes are that:

Each of these assumptions is discussed in more detail below.

ESOs are American options, i.e., exercisable at any time, once they have vested. The value of an American option is always at least as large as that of a European option that is identical in all other respects. However, the difference in value is generally rather small. There will be no difference at all for a non-ESO option if the stock does not pay dividends, as under those circumstances it is always optimal to wait until expiration to exercise. The reason that this is optimal will be explained later, after the concept of time value has been introduced.

It can be optimal to exercise a non-ESO American option early if the stock pays dividends, but generally only if the dividend yield is high and the stock is about to pay its last dividend before expiration. The procedures used to calculate the value of an American option are considerable more complicated than calculating a Black-Scholes value (BSV), the user would have to input a dividend payment schedule, and the difference between the resulting value and the corresponding BSV would generally be rather small, so StockOpter.com uses BSV rather than procedures designed to value American options.

The lognormal random walk model for the behavior of the price of a stock is an industry-standard model that has been found to work well in practice. It is based in part on the assumption that the stock market is efficient, i.e., that the stock price at a given moment reflects all the information available at that moment. Stock prices change for reasons, but changes that are about to happen will be due to new information, which by definition cannot be predicted ahead of time. It is of interest that the very activity of trading seems to be a major contributor to stock price volatility; evidently one of the pieces of information relevant to a stock price is what other market participants are doing. The “with drift” part of the description of the model refers to the fact that over time stock prices tend to increase. For a more detailed discussion of the lognormal random walk model please review the white paper on this topic here.

For ESOs, the option owner might know significant information about his or her company not available to other investors, and thus have a somewhat better sense of where the stock price may be going than provided by the lognormal random walk model. ESO owners should try to avoid being overly confident of this, however.

The BSV of an option can be thought of as consisting of two additive parts, namely its intrinsic value (IV) and its time value (TV). The IV is easily understood; it is the amount by which the option is in the money. It is the larger of the current stock price minus the strike price and zero. It is also known as the in the money value.

The TV is a little more complicated. Consider an option that is a little bit out of the money and is a ways away from maturity. Would you be willing to pay something for such an option, even though its IV is zero? Of course you would, since there is a significant chance that the option will be in the money at maturity. In this case what you would be willing to pay for is entirely TV.

Now, consider an option that is a little bit in the money and is a ways away from maturity. You now have some IV at risk, but not much. You could lose that, but you could also gain a lot if the stock price rises considerably. Thus, you would be willing to pay substantially more than the IV for the option, with the difference being the TV.

These ideas are illustrated in the following graph: 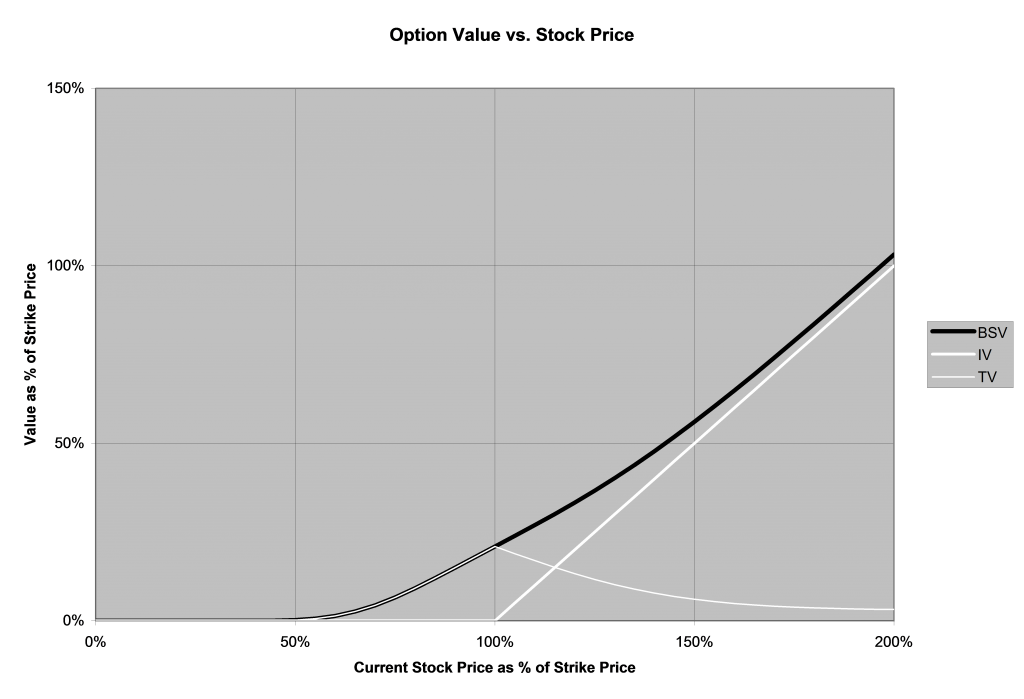 Once the current price becomes above the strike price, it continues to be true that the higher the current price is, the higher the BSV will be. However, in this range the increase in BSV is entirely due to increase in IV; the TV actually decreases as the current price rises. The TV decreasing is due to having more and more IV that can be lost if the price falls offsetting the potential gain in IV if the price rises. When the option is very far in the money, it is virtually certain that the option will expire in the money and will be exercised, and the economics become essentially the same as having irrevocably committed to buying the stock for the strike price at the expiration date. Here the only time value remaining is due to deferring paying the strike price. If one does not discount the strike price, the time value becomes essentially zero when the option is far in the money, as shown in the following graph: 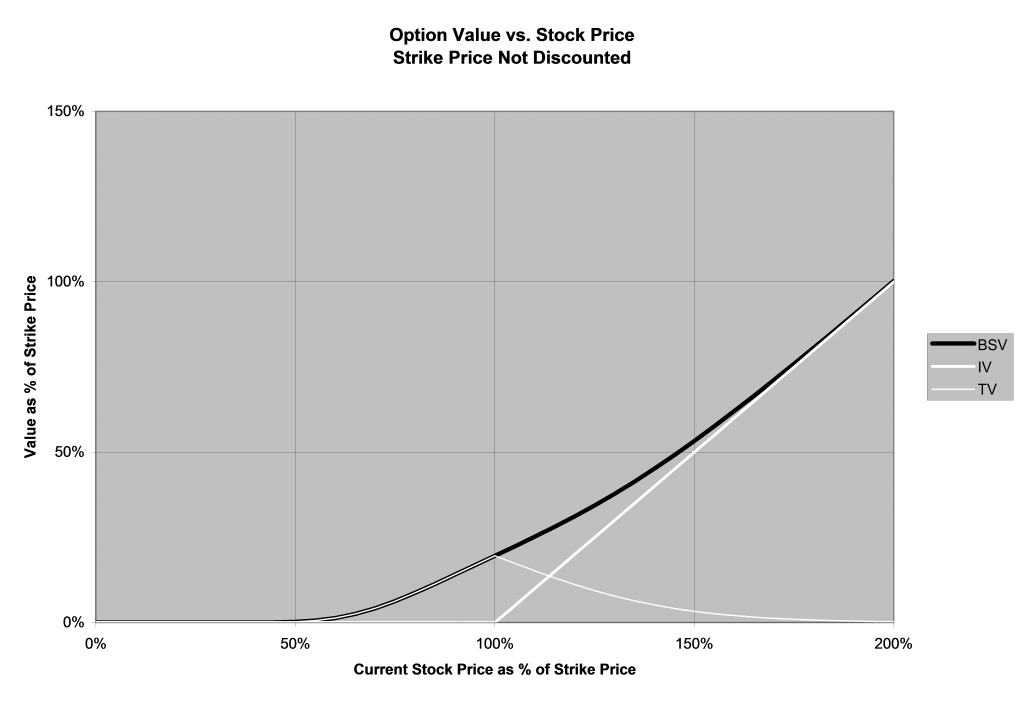 If an option is a non-ESO American option on a stock that does not pay dividends, it will never be optimal to exercise early. If one does exercise early, one will receive only the IV, and not the TV. One may have any number of reasons for wanting to no longer own the option, but the optimal way to achieve that is to sell the option to someone else, and thus to receive the full BSV, not just the IV. This includes being able to sell an option that is out of the money, and for which the BSV thus consists entirely of TV.

Inputs to BSV and Their Effects

A BSV is calculated using these inputs:

The strike price and the current price are the sole determinants of the IV of an option. The relative values of these two inputs also affect the TV of an option, as described in the preceding section.

The risk-free interest rate affects the TV of an option in two ways:

One would think that for both of these purposes a risk premium should be added to the risk-free rate. That is correct in principle, but in practice this is not necessary because the error due leaving it out for one use cancels the error due to leaving it out for the other use. This is fortunate, because as a result one can ignore differences in risk appetite between different investors. The higher the risk-free interest rate is, the higher the TV will be, due to both of the ways in which it affects TV.

The effect of volatility on TV is closely related to the main effect of time until expiration, but the effect is even larger. The higher the volatility of the stock price, the greater the potential price change, and thus the larger the time value will be.

There are a number of reasons why the true value of an ESO should be different from its BSV. These include:

The first two points above should have relatively small effects. The fact that ESOs are American options, while BSV is for European options, should make the value of an ESO higher than its BSV when this effect is considered in isolation. This effect generally will be small, however, and it will be zero if the stock does not pay dividends. As for dividends, StockOpter.com uses a modified form of BSV that incorporates their effects, though in an approximate fashion.

The fact that ESOs are not marketable means that any calculation of the value of an ESO cannot be empirically validated or invalidated by comparison to a value in the marketplace. Another result of ESOs not being marketable is that it may make sense to exercise early, as selling the option to someone else and thus receiving the TV, in addition to the IV that the option owner would receive in either case, is not an option. Reasons for exercising early include needing the money right away for an expense or wishing to diversify.

The value of the TV should be discounted in this deliberation if the option owner considers it likely that he or she will leave the company significantly before the ESO expiration date. One can experiment with this by substituting earlier dates for the actual expiration date and seeing the associated reduction in TV.

Part 2 of this white paper goes into greater detail and can be found here.