StockOpter.com’s value-at-risk (VaR) calculations also assume that this process applies, as do its calculations of probabilities associated with various stock prices. For more discussion of the Black-Scholes option-pricing model and VaR calculations, please review the white paper on this topic in the StockOpter University.

The next three sections of this paper are organized around different pieces of the name for the process.

A random walk process is one in which the change in value over any time interval is independent of any changes that have occurred in preceding time intervals, and the size and direction of the changes in value are in some sense random. For stock prices, the applicability of a random walk is based on the assumption that the stock market is efficient, i.e., that the stock price at a given moment reflects all the information available at that moment. Stock prices change for reasons, but changes that are about to happen will be due to new information, which by definition cannot be predicted ahead of time.

For example, consider a stock for which the expected increase in value per year is 10% and the volatility of the stock price is 30%. The volatility of a stock price is a measure of its variability; for a detailed discussion of volatility please review the white paper on this topic. The following graph shows the probability distribution of possible prices 1, 2, and 3 years from now if the price of the stock follows a lognormal random walk with drift: 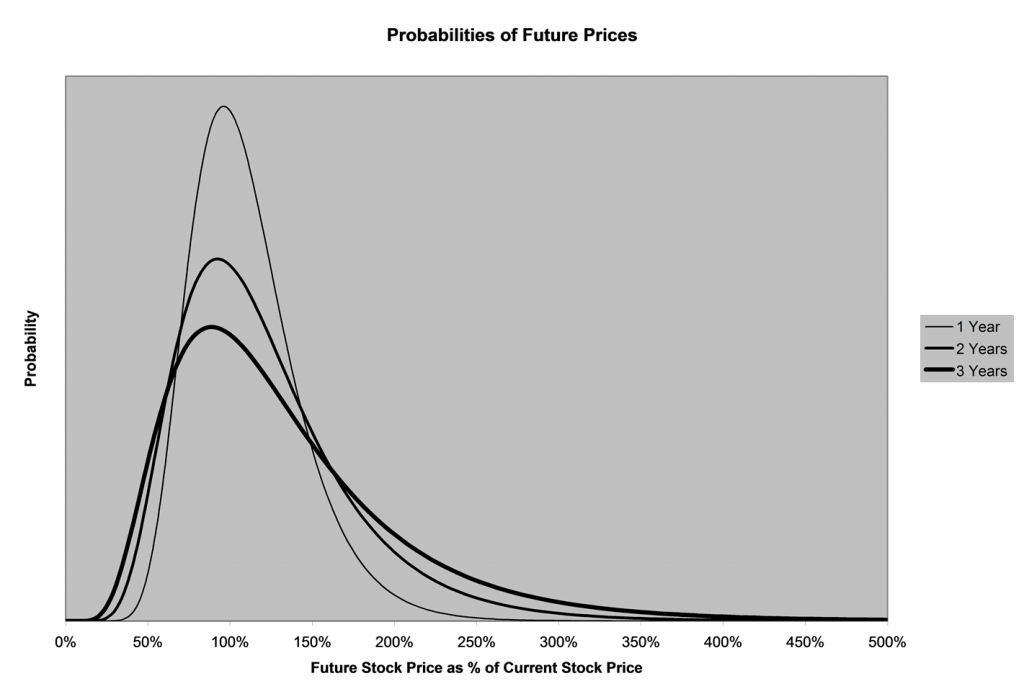 As is usually the case, the single most likely price (the peak of the curve) goes down as we look further into the future. However, this is more than offset by the increased likelihood of the price being quite high as we look further into the future. The probability-weighted average price for these distributions are 110% of the current price in 1 year, 121% in 2 years, and 133% in 3 years, which is consistent with the expected increase in value being 10% per year.

The following graph shows the probability distribution of ln’s of possible prices corresponding to the above graph: 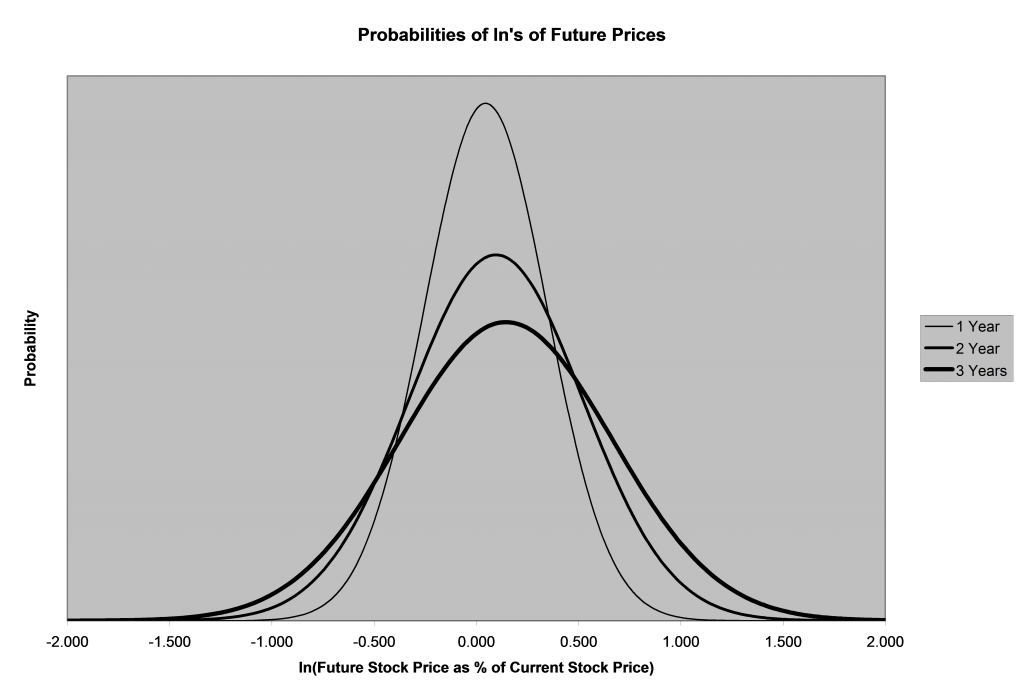 Why the Lognormal Assumption Makes Sense

Consider first what would happen if change in stock price, and thus the end-result stock price, were normally distributed. There are two main problems with this. One is that there is nothing to prevent a random walk of the stock price from producing a negative price. The other is that there is no scaling effect. One would expect that if the current price is $25 the potential changes in price should be half the size that they would be if the current price is $50, all else being equal. If not, one’s investment in a particular stock would become much more risky if there were a stock split.

One can try to salvage a normal model by introducing relative changes that are expressed as percentages of the current stock price. There are problems with this as well, however. One is that prices can still go negative. If we ignore drift, a price change of -125% will be just as likely as a price change of +125% if we assume that the changes are normally distributed. Yet a deviation of more than 100% in the negative direction is impossible, since it will lead to a negative price, while a deviation of more than 100% in the positive direction is quite plausible; there is no reason that the stock price cannot more than double.

Another problem with modeling percent changes is that one runs into problems with consecutive time intervals. Suppose that we are modeling consecutive one-year changes. If one assumes that percent changes are normally distributed, prices at the end of the first year will be normally distributed, since all of the changes had the same starting price. However, the dollar change in price during the second year for a given percent change in price depends on the price at the end of the first year. It turns out that the distribution of prices at the end of the second year modeled in this way will be much closer to a lognormal distribution than to a normal distribution. This should make us have doubts about how we modeled the first year. Should we have broken that down into shorter intervals as well? If so, what intervals? Unfortunately, the results will depend on the intervals chosen.

Using a lognormal model solves all of these problems. Change in ln of price is similar to percent change in price, but the differences are telling. The following table compares given changes in ln to comparable percent changes:

There are two very important desirable features of these results. One is that, as the above table would make one suspect, there is an inherent floor on a decrease in the value of a number, in our case the stock price, of -100%, and it takes a very large decrease in ln to get close to that floor. This is due to the fact that the ln’s [negative infinity, 0, positive infinity] correspond to the numbers [0, 1, positive infinity], respectively. All ln’s greater than negative infinity correspond to positive numbers; a negative ln just means the number is less than 1. Thus, by modeling the ln’s of prices, we guarantee that prices remain positive, though they can become quite small.

These two desirable features of changes in ln are related to the fact that for a lognormal random walk model, one can model changes over various time intervals and have the results be internally consistent. One can, for example, model a two month change directly as such and obtain the same probability distribution, only far more easily, as one would if one modeled consecutive one month changes with the same inputs. Demonstrating this mathematically is best left for the Part II material, but it is a very useful result.

These desirable features of a lognormal random walk with drift model help explain why this model works well in practice and why it has been assumed in deriving the Black-Scholes model, among others.