While performance‐based awards have become the most common long‐term incentives granted to executives at most companies today, so‐called “full value” awards, including restricted stock or restricted stock units (“RSUs”), remain a common equity award. (See our March 2017 Digest for data on the current mix of long‐term incentive (LTI) awards). We have noted not only a marked shift away from restricted stock to the use of RSUs and more recently, based on the recommendations of corporate governance monitors, the addition of performance vesting features in RSU awards. Time‐vesting LTI has been criticized by some as “pay for pulse” – that is, it can provide significant value even without stock price appreciation.

We recently updated our informal survey as to the utilization of restricted stock and RSUs at 325 companies where Ayco provides financial counseling or financial education services.

Most of these companies have a history of making grants annually, while others do so only periodically or as special grants to select executives. Our data is intended to reflect regular annual awards made to executives compared to grants made 10 and 20 years ago by Ayco corporate partners (see the graph below).

There are several reasons why RSUs have replaced restricted stock at a large majority of the companies in our survey group. The primary reason is the administrative convenience and likely lower cost. Each RSU is the economic equivalent of a share of company stock. However, unlike restricted stock, each unit is a bookkeeping entry similar to phantom stock at a private company. Stock (or sometimes cash) is not issued until restrictions lapse. Thus, RSUs do not count as outstanding shares using up the number of shareholder authorized shares. There also can be a difference in entitlement to dividend rights and RSUs typically do not have voting rights. However, RSUs are considered to be deferred compensation subject to IRC 409A, unlike restricted stock. This can impact when awards are paid out.

Tax planning for restricted stock and RSUs often differs from that for stock options and performance awards. In one sense, planning is easier for restricted stock; executive pays income taxes at vesting or when any substantial risk of forfeiture no longer exists. Thus, there is less need to develop a timing strategy as to when to exercise and sell as with stock options. However, care should be taken to avoid appreciation of the wash‐sale rule. The sale of other company stock at a loss within 30 days before or after vesting or payment can disallow the loss on the sale.

Restricted stock does offer a unique tax‐planning opportunity that is not available for RSUs or other equity‐ based awards: the ability to convert appreciation above the grant date price from ordinary income to capital gains. This is achieved by making a Section 83(b) election within 30 days of the date of transfer (to be further described below).

One potential advantage that RSUs provide is the possibility of deferral into a nonqualified deferred compensation (NQDC) plan. But any elective deferral must meet the strict timing rules under IRC §409A. In our last informal survey of NQDC plans, approximately 18% of the surveyed companies currently allow for the elective deferral of RSUs.

In regulations issued in 2014, the IRS clarified the rules as to what constitutes a substantial risk of forfeiture leading to taxation of restricted stock. Generally, an employee’s entitlement must be conditioned on the future performance of substantial services (i.e., continuing to work until a future date) or be tied to the occurrence of a condition related to the purpose of the transfer. To determine if the risk is “substantial”, it is necessary to evaluate the likelihood that the forfeiture will occur and that it will be enforced. Examples in the regulations indicate that certain restrictions which could lead to penalties do not create a substantial risk of forfeiture, including lock‐up agreements following an IPO and limitations on sale due to SEC Rule 10b5‐1. However, restrictions on the sale of company stock due to SEC §16(b) could delay taxation. Generally, non‐compete clauses and clawbacks will not constitute a substantial risk of forfeiture delaying taxation.

In separate regulations issued last year focusing on deferred compensation at tax‐exempt organizations, the IRS stated that an amount would not be considered subject to a substantial risk of forfeiture if the facts and circumstances indicate that forfeiture is unlikely to be enforced.

For recent awards that have a time‐vesting schedule, we found almost an equal number of companies use “cliff vesting” as opposed to ratable or incremental vesting over a defined period. Vesting typically begins one year (or more) following the date of grant. For those companies with time‐ vesting, the following illustrates the schedule among our survey group: 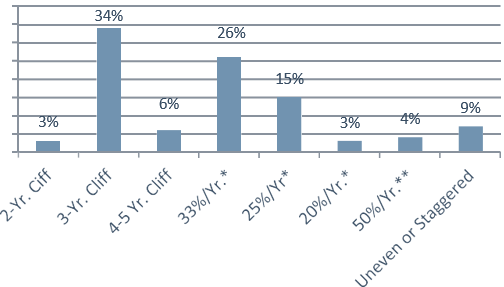 Time‐vesting may not necessarily align the interests of executives with shareholders or with the achievement of corporate goals. As a result, many companies now have incorporated a performance feature in a portion (or all) of their restricted stock/RSU grants. Thus, “pay for pulse” becomes “pay for performance”. Performance‐based restricted stock is similar, but distinct from, performance shares or share units. We now count just over one‐third of our survey group with a performance feature for at least some grants, including quite a few companies that have incorporated this feature into awards for the first time within the past two years. In fact, the most recent awards at approximately 30% of our survey group for some or all executives had only a performance‐vesting feature. These could be reflected in the proxy disclosure table that reflects the relationship between compensation paid to key executives and the company’s total shareholder return.

An alternative award that combines features of a full‐value award with a performance metric based on stock price growth is a Market Stock Unit (MSU). The number of shares actually earned will be based on the ratio of the stock price at the end of the vesting period over the stock price at grant. Thus, the actual payout can represent a different value than a full value award. Approximately 2% of our survey group currently grant these awards.

Companies which do not regularly grant restricted stock or RSUs may still utilize these awards for special situations. As an example, several companies disclosed in their 2017 proxy that they have granted restricted stock/RSUs to newly‐hired executive officers to offset forfeited compensation from a previous employer, and many companies reported that they have made special grants of restricted stock or RSUs to existing executives for retention purposes. A number of companies also disclosed that they allocate a pool of RSUs or restricted stock to be used for recruitment, performance recognition or promotion awards. A small number of companies (approximately 1% of our survey group) grant awards which vest only at retirement – so called “career shares.” These can be the ultimate retention device.

If an award recipient voluntarily terminates employment prior to vesting of an award, virtually all companies forfeit the restricted stock/RSUs ‐ although, a few plans provide discretion to pay a pro‐rata portion in certain circumstances, such as an involuntary termination. In contrast, just over three‐quarters of companies provide for the acceleration in vesting in the event of the death or disability of the employee. A majority of plans allow for the designation of a beneficiary to receive payment of an award upon the death of a recipient prior to payout.

Just over one‐half of companies provide for an acceleration in vesting in the event of a “qualified retirement”, while 10% provide for pro‐rata vesting in that situation and 5% continue the vesting schedule. The definition of a qualified retirement varies among our survey group. The most common definition is at least age 55 with 10 years of service – but 8% have a lesser age threshold and 30% use an older age.

Other Issues to Consider

The increase in utilization of restricted stock and RSUs is due to a variety of factors that make them attractive to both employers and employees. These include: